This page is a work in progress.

A private citizen paying an audio-voice professional to records a list of words in his language is also a de facto option. Wikimedia cannot, by rule, pay for content. But given the high productivity of Lingualibre's studio (Special:RecordWizard), it becomes affordable, efficient and profitable for private citizen or institutions to lead such operation, hire an audio professional who will mass record. A first experiment was made with Cantonese. A modest 300€ lead to the creation of 5,000+ audios files within 3 weeks. These 5,000 words make up around 95% of daily Cantonese conversations. Cantonese can therefore be considered as largely covered, on the teaching side at least. For a more exhaustive coverage, 30,000 would be a better target.

This approach is especially needed and promising for rare languages, where volunteer contributors are and will stay hard to find. Sometimes, sponsoring contribution could boost a language. With such low amounts involved, a private or institutional donor can likely be found.

Editathons aim to gather and synchronize a group of interested users into editing Lingualibre's content pages. It could be the Help documentations (Help:*), project space (LinguaLibre:*), currenting wordlists (List:*/*).

Hackathon aim to gather and synchronize a group of interested users into taking over Lingualibre's codes (see github.com/lingua-libre) and features/bugs tickets (phabricator:tag/lingua_libre).

Skills we are looking for are mainly organizational skills for events management, then JS and VueJS (web developments) ; PHP (mediawiki) ; Python (bots). 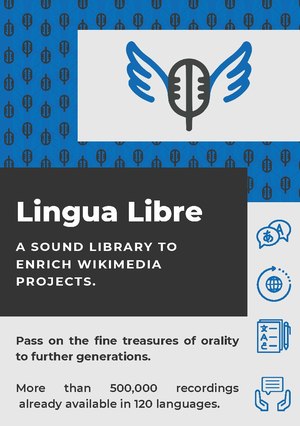 Existing document may be reprinted and sent to various local groups.

An vastly overlooked aspect of Lingualibre is the networking and communication side. Following April 2021 site-wide upgrade LinguaLibre's rapid-recording-as-a-service is technically stable, mature, and satisfying. The real need is in letting the outside world know how the recording studio makes rapidly and clean audio recording possible and easy. Early outreach has been limited to French Wikimedians and as since expanded toward European and Indic Wikimedians. These Wikimedia groups returns a unbalanced by geography and gender.

Each of these groups has various sub-groups, not aware of how « LinguaLibre makes rapid, clean, mass recording possible ». There are opportunities to gently ping these communities via multiples entries points, assess these communities actual appetite for rapid recording, send them flyers ? The field is actually quite new with custom and hybrid solutions to find.

The table below is an indicative summary but not authoritative. Please refer and engage with to each grant as needed to clarify if your idea fits their needs and rules. Grants can be allocated to organizing forces.