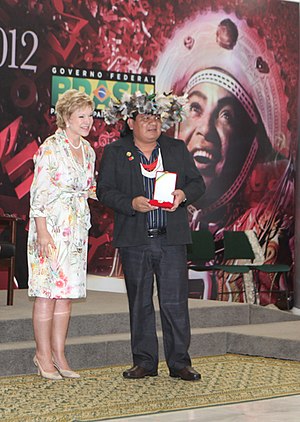 Almir Surui, 2012, receiving a culture price from the Brazilian government. Almir is the native speaker willing to audio-document his Surui language using LinguaLibre.

In this case study, the community we work with here is the Surui people, located in North-Western Amazonia.
It's a small population of 30 Amazonia forest's villages and 1,600 native speakers.
Suruis speak both their own Surui language and Portuguese language as the national language of Brazil. Levels of bilingual mastery varies.
Westernization is radically changing daily practices, culture and language.

Almir Surui, their elected chief, is our contact and has shown willingness to lead such effort.
Recent effort to preserve and revitalize their language are underway : they recently normalized Surui language's writing, elementary school is in Surui language, with associated new books.

There is no existing wordlist to reuse to record in Lingualibre.

Given their second language is Portuguese…
Given academic researches recommending word list sorted by frequency…
And given we have such list in Portuguese…
We will work with Surui natives to translate such Portuguese list into Surui :

Almir has, as requested, identified a translator.

This translator will need to either translate :

Surui language being very different from Portuguese, we can advance in phases :

Qualitatively, this whole will constitute a solid bilingual Surui <=> Portuguese vocabulary, and with Lingualibre, a multimedia dictionary.

The Surui list will ultimately be a single Surui wordlist ready to save. A few rules must be taken into account to properly carry out this effort.

2) The format of our vocabulary list is therefor as follows:

4) To the Portuguese L1 word on the left, we add as the L2 translation on the right its most common synonym. Example for L1 Portuguese → L2 English:

5) If an L1 word there is no L2 translation, go to the next word, because we want to translate as many words as possible. Example, "Arranha-céu" is ignored:

6) If for an L1 word several very common L2 translations exist, duplicate the line and translate:

7) If for an L1 word too many L2 translations exist, by variations, add only the base. Example for verb variations for English L1 and Portuguese L2:

We only translate the core base, we do not translate variations.

8) If there is no L1 word, and there is a specific L2 word, add a line and a word after the arrow. Example, if Portuguese has no word for "Penguin", then:

A 4 hours training session was organized for Almir with :
1) Strategic consideration for long term collaboration, presentation of existing learning apps
2) Discussion around Surui vocabulary and variability, clarifying the focus on word stems only.
3) Presentation of LinguaLibre and first trial usage with 100 words (work not uploaded to Commons)
4) Pause / Cleaning of the provided list
5) Productive recording session with audios sent to Commons.

A local bilingual teacher started to translate the first list of 2,000 common Portuguese words. There was, naturally in this first work, some formating error to refine :

The source Portuguese list covers 20,000+ common words to got further. The following lists are available for translation into Surui, in order to quickly build a basic Surui vocabulary of 9,000 Surui words (assuming 10% words will be skipped) :